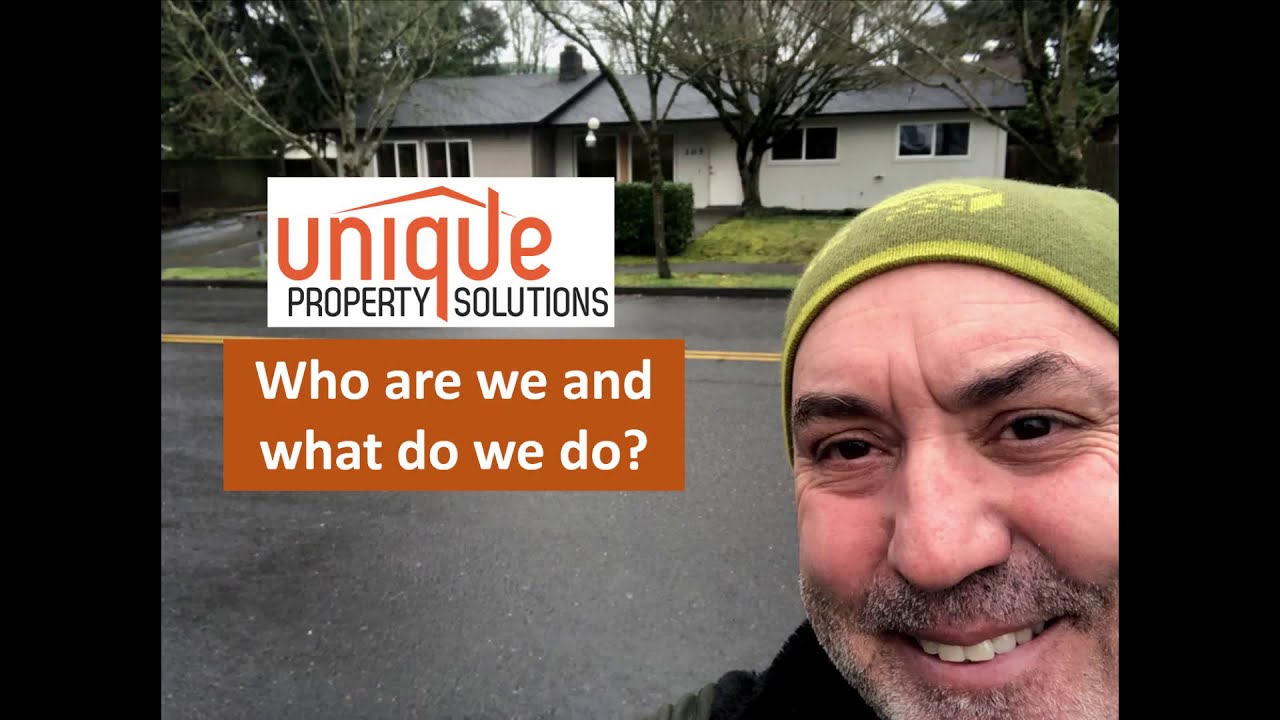 Jerry Baker: Hey, everybody. I’m Jerry Baker, the owner of Unique Property Solutions. We buy houses, we keep some. I tell people, we buy some, we keep some. We fix them. We’re going to start doing some video and we’re going to start posting them on our websites and start answering questions basically. And the one I probably get asked the most is, how do you buy a house for me? So I’m going to walk you through the process fairly quickly and I’ll tell you the general steps for what happens when you call our company. I’m going to happen to use a property I’m buying tomorrow.

John called in, he got one of our flyers. So usually people call us from either flyers, they see our signs, it’s a referral, they see our job site signs, banners, we have various things out there. And on those things ar phone numbers … Get answered by Shannon, my marketing person. She will then walk you through a questionnaire to learn about your property, find out what your situation is, which is probably the most important thing. Because what we always want to do is we have to come up with a solution that meets your needs or else we don’t need to talk to each other, how we’re not a good fit for you. So she’ll walk you through that stuff.

She’ll ask you eventually about what price you want to sell a house for. Some people will come in and say, “But that’s why I’m calling you, to give me a number”, but we always want to try to ask to see at least see if we’re in the ballpark because if we’re in say 150, $200,000 neighborhood, and you say you want $300,000 for your house, I know we’re wasting our time. And if you say you want $30,000 for your house, then I’ll be there in 30 minutes with a check. So we want to just get a range that we’re in the ballpark.

Then what usually happens is I will do a drive-by when I’m up in the various areas and I’ll look at the property, analyze the property from the outside. I do not disturb tenants. I don’t walk in front of your house, unless you tell me it’s okay or if it’s vacant. I looked at one yesterday, and the lady goes, “Go poke your head in there, it’s vacant.” Then after I see the property, I’ll set up a time with you to come meet either you at the property if you live there, or wherever it is you live, or we’ll walk through the property. I need about 10 or 15 minutes in every property I buy. I have a saying, I don’t buy a house I don’t put my eyes on. And so I’ve been burned a couple of times by not doing that. And so it’s a fairly short, usually it takes me 15 minutes to walk through a house with you and we’d look at everything, we talk about the house.

But more importantly, we’re talking about your situation and why it is you’re talking to me. Because 95% of the people are going to hire a realer, three to 5% of the people are looking for a quicker sale for various reasons, and not all those reasons are negative. They’re not, “I’m losing my house. I’m going in foreclosure” and those things. They’re often, “I got a new job in Austin, Texas. I have to be there in two weeks.” The 80 year old seller said, “My son wants to me in Washington DC by the end of the month.” She’s actually one where when I asked her what she wanted for the house, she said 105,000, and I told her I couldn’t pay her that. And then I told her I have to pay her more than that, so I actually paid her 25,000 more than that.

I pay what I can pay to make sense for everybody, because I have to sleep at night too and I don’t want any elder care abuse cases on my desk with an angry son saying, “You took advantage of my mom.” I always leave the contract, let you think about it, let you get a review, take it to an attorney, whatever you do. I don’t put any high stress on you whatsoever and say, “If you don’t sign this now, I’m going to buy another house.” So that’s part of our friendly part, I guess, and fair part.

So once we come to an agreement, it can happen very fast because I’ll walk you through how I get to my offer. I’ll literally show you what I think I’m going to sell it for, what my costs are going to be, how much I think my rehab is going to be, the cost of my money when I use borrowed money, cost of paying closing costs, all that stuff. I literally show you everything and go, “That’s what I can pay you.” A lot of times, I end up not paying you that because I tell you I’m not a great option for you and I’ll tell you, “Go sell this house retail and try to get top dollar for it because your situation doesn’t need a quick sale.” If that’s the case, then I refer to you some very professional realtors that I use that will give you a discount and I know can take care of you.

Then once we come to sort of an agreement on price, we’re working in the right area, then I usually come home, I write up what’s called … The title of it is literally called Simple Real Estate Purchase and Sale Agreement. It almost is a glorified handshake, it literally says your name, my name, price, buying it as is, some inspections like there’s a septic I might need to do, in-septic inspection. But typically my inspection is when I walk through the house. I don’t need an appraisal. I’m paying all cash, I’m paying all the closing costs, what day do you want your money, it’s really that simple. With me, you’ll know when you get paid, you tell me when you want the money, you tell me when you want to move out and it all works to fit your plan or else I don’t want to do it with you.

I only buy about one out of 10 houses I look at, so sometimes it’s situations, sometimes it’s the house itself, so I’m not buying everything. I’m only buying the ones that make sense for both of us.

Once I get a purchase contract from him, I will take it to escrow tomorrow, I will open escrow, they will start the process of getting [Paddle 00:05:49] reports and different things, and seven days later you’ll get a check. It literally is that easy when it needs to be. I just did one for a retired couple, they had a big mortgage that they kept refinancing and refinancing and refinancing, and they had ended up with a big house on four and a half acres. His health was failing a little, so little blackberries were coming at them, the weeds were coming at them, the maintenance was coming at them. She was going to have a pretty big reduction in her retirement income in June.

So had they sold the house, they would have not sold it for enough to cover their mortgage. And it was that mortgage price was right at the amount where I could take the property. It’s called a subject 2 deal. I make the payments on their mortgage starting immediately, so that got the burden of the mortgage off of them, and I gave them some money to move into their new house. I gave him some names of where to find new houses and property managers, they found a new house.

Last time I saw them, they were super happy that they were moved out and had that big property off their back. The seller could concentrate on his health and relax and just have that whole burden off his hand. And we did that very quickly.

So I’m going to start wrapping up. The process is really that easy when it needs to be. It’s a glorified handshake. When do you want your money? How do you want to get paid? I’ll even talk to you about how do you want to invest it and maybe even make more money with your money down the road. There’s lots of things we can talk about, but we’ll talk about those in other videos. If you have any questions at all, give our office a call. I’m going to have to even look at the number, I don’t even know my own number, 360-328-7872. That’s 360 328-7872. More than likely, you’ll get to talk to delightful Shannon and we’ll go from there. I look forward to talking to you. I hope this was helpful. Thank you.

Listing vs. Selling To Us

Which route is quicker?
Puts more cash in your pocket?
Has less hassle?

Get Your Fair Cash Offer: Start Below!

We buy houses in ANY CONDITION in WA. There are no commissions or fees and no obligation whatsoever. Start below by giving us a bit of information about your property or call (360) NOW-CASH...